“Having a basketball team gives Al-Huda School a team to root for. The students can feel a sense of pride because the team is something that represents them, represents Islam, and represents Muslims,” said Brother Jeyone Muhammad. Brother Haroon Baqai, principal of Al-Huda School, awarded the prestigious position of head basketball coach to Muhammad in late September of 2019. After conducting two tryout sessions and selecting ten student-athletes, Coach Muhammad officially started training the new team, Al-Huda High, in November. Muhammad has ten years of experience as a coach for local basketball teams in various leagues across DC, Maryland, and Virginia.

The coach oversees two practices per week. On Tuesdays, they train at a gym working on fundamental drills and execution of the offense and defenses of their game plan. On Thursdays, they train at Al-Huda School’s outdoor basketball court and focus on strength and conditioning exercises like running and jogging. For more rigorous training, Coach Muhammad led the student-athletes through two four-hour mini camps in December 2019 at Blake Highschool. 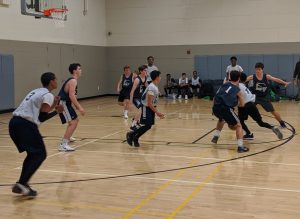 Al-Huda High’s first game was on Sunday, January 12th, 2020 against the Bolts from Northern Montgomery County. It was a game of two halves; the Al-Huda players started out nervous and had “first-game jitters,” as described by Coach Muhammad. The Bolts jumped out on Al-Huda’s players and scored for most of the first half–but Al-Huda High bounced back and played with a greater sense of urgency in the second half. Al-Huda High stepped up their defensive pressure and continuously gained possession of the ball from the opposing team, leading to several scores. “Sophomore forward Maheer Bello played with a lot of confidence in the second half and led us in scoring. Freshman point-guard Elyas Elsubehat had a solid game handling the ball and despite being the shortest player on the court, ended up leading us in rebounds. Overall the guys did well in our first ever game despite the loss. I’m proud of them but we have a lot of work to do in practice to improve for the next game,” said Coach Muhammad. 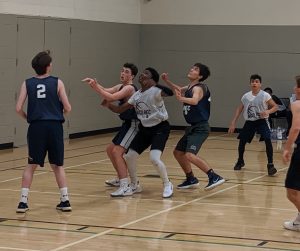 “We played pretty well and had some good rebounds, but we need to work better on passing the ball and making shots,” said Elyas Elsubehat, a freshman from the team. Even though Al-Huda High lost the first game 12-25, the players showed a lot of improvement since the first tryouts. “None of my guys have played organized basketball before but surprisingly they’ve been able to absorb a lot of info and instructions in just two months. Most of them could barely dribble or make a lay-up when we had tryouts, and now they’re making weaker hand lay-ups with consistency. They’re also really starting to understand the offense and defense with regards to floor spacing and being in the right place at the right time. We still have a long way to go but we’re moving in the right direction, Alhamdulillah,” explained Coach Muhammad. Al-Huda High will be having a game each Sunday until the end of the school year. In the spring and the summer, Coach Muhammad hopes to schedule more frequent games for them.

“Playing for Al-Huda is a new feeling because even though we’re a basketball team, we’re also more like a family. We have each other’s backs on and off the court, and now we can be on a real team and get better at our game strategies,” recounted Mahmoud Mansour, a senior Al-Huda High team member.