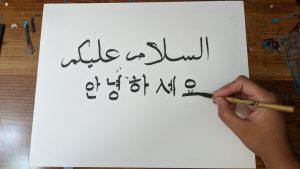 A young girl pressed her forehead against the glass of her mother’s minivan, a worn notebook resting atop her lap. Tree. ‘Namu,’ she scribbled. The young girl would swirl each Korean word along her tongue until it bore the same recognizable taste of Arabic— her family language. An Al Huda alumna, Tasneem Mansour reshaped her mouth to accommodate the unfamiliar “oohs”and “ahhs” of Korean.

“The very first thing that caught my attention was the Korean greeting, ‘Annyeonghaseyo.’ It literally means, ‘Are you doing peace?’ and that reminded me of how as Muslims we say, ‘Assalamu ‘alaikum.’

That’s kind of the very first thing that made me want to learn more Korean,” Mansour said. The lure of Korean dramas nestled Mansour within its embrace, teleporting her to the fantastical realms of history and tragedy, and nurturing a bubbling passion yet to reach fruition.

“As I started learning more about Korean culture, I found more similarities between Korean culture and Islam,” she continued. With each comparison, Mansour’s fondness for the country and its language swelled.

Mansour’s high school assignments often resulted in the reward of a self-taught Korean lesson. Having scoured the bowels of the Mansour residence, she basked within the relief of language study sites and her trusted pen and paper. “I studied in my room, living room, anywhere I could find. When I studied I would practice grammar points, try making example sentences, use language learning apps like Memrise, and when I practiced there would be random moments in the day where I would just write words in Korean off the top of my head,” Mansour said. Her newfound language glimmered against her curriculum of Arabic, English, and government, and she yearned to incorporate her new passion into her looming college career.

“The very first thing that caught my attention was the Korean greeting, ‘Annyeonghaseyo.’ It literally means, ‘Are you doing peace?’ and that reminded me of how as Muslims we say, ‘Assalamu ‘alaikum.’

“I would say that when I first decided to study Korean [in college], I didn’t have an exact plan as to what I would do with my degree, but I knew that I enjoyed learning it. Around my junior year [in college] I realized that I would need to have something in mind. At that point the only thing I knew was that I enjoyed learning Korean, and that I wanted to contribute something beneficial for Muslims, be it in the immediate community or elsewhere,” Mansour said. Her course as an Al Huda student embedded Mansour within a community of familiar faces and cultivated relationships that soon resembled the comfort and familiarity of an extended family.

“Alhamdulillah I would say that being surrounded by Muslims in general puts things in perspective for me. There are some Muslims around the world who don’t have the blessing of being surrounded by other Muslims who understand their needs or their beliefs. With respect to my hopeful career path inshaallah, I wanted to utilize my knowledge of cultural exchange and experience as a Muslim to help other Muslims strengthen their relationship with Islam, bi’ithnillah,” she continued.

Despite her busy schedule, Mansour strives to maintain her connection with the Al Huda community. “At the very least I try my best to visit Al-Huda every few months to catch up with my past teachers. I’m also a part of the alumni association and alhamdulillah we’ve organized a few events for the alumni,” she said. 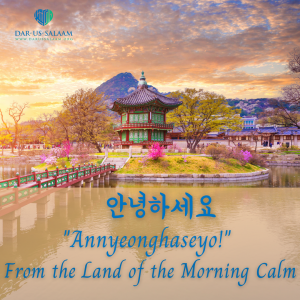 A UMBC student, Mansour studies Modern Languages, Linguistics, and Intercultural Communication with a track in Korean Language and Culture, and a Minor in Arabic. Her enchantment with Korea and its parallels with Islam led her to write and defend a senior honors thesis about the mutual perceptions between Muslims and Koreans in Korea. “Insha’allah, I hope to one day go to South Korea to teach Arabic to the Muslim community there.”

Author: Mecca MustafaMecca Mustafa graduated from the University of Maryland at College Park with a degree in English and minors in Creative Writing and Arabic. She also attended Al-Huda School as a young Muslimah :)
December 29, 2020 at 11:58 am Share via: