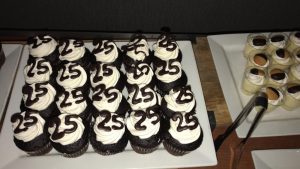 Blessings showered down on the community after donors raised $300,000–including sponsorships, ticket sales, and pre-event donations–on December 1st, 2019 at the 25th anniversary fundraising banquet, “Only You.”  Each year, over one hundred Dar-us-Salaam employees and volunteers come together at the Bethesda Marriott Hotel in Rockville, Maryland to organize this special community event, and each new fundraiser comes with new innovations — this year was no exception.

Over the past several years, the banquet organizers had a paper ticket system in place. This year, they introduced a new system where attendees bought tickets through Eventbrite, an event managing website. Attendees scanned their electronic tickets; this allowed for a smoother check-in process. “The registration lines were not as crowded as they were last year, and they moved noticeably smoother and quicker,” said a Dar-us-Salaam staff member who has been heavily involved in the fundraiser’s setup for the past several years.

This year, there were over 300 children present at the event. Children ages 3-8 went to the childcare section, while children ages 9 and up went to the youthcare section, “DUSperience.” It included many new activities like laser-tagging, bubble-ball soccer, inflatable twister, and arcade games. The childcare also had new activities this year like professional face-painting and balloon animals.

“We had so many new things this year that we didn’t have last year. Last year we only got to watch a movie, but this year we played soccer with the big bubbles and there was even laser tag and arcade games! This is definitely my favorite fundraiser so far,” said a seventh-grader who participated in the DUSperience activities.

Aside from the new ticketing system and childcare activities, the difference that really shined throughout the event was that it was very “student-centered,” as described by Br. Haroon Baqai, principal of Al-Huda School, who served as MC of the dinner. “The highlight of the banquet was the play, which was put together and conducted by students. That was a very different thing from the previous fundraisers,” said Baqai.

“Al-Huda School giving us the chance to perform the play at the fundraiser was definitely a way for us to express our talents with the people we love in a way that’s good for the community,” said Huda Javaid, a young seventh-grader who took part in the play.

After Baqai’s warm welcome, the program officially began with the recitation of Surat Al-Fatiha by one of Al-Huda School’s Hifz-School students. Omar Aly, a six-year-old deaf child, stood up on the stage beside the reciter and provided ASL interpretation for the audience.

“The theme ‘Only You’ took us back to the reason we established this institution [Al-Huda School], and that is to focus and make Allah our priority. Another way of putting it is saying Allahu Akbar. Allah is the greatest in our lives. That is the meaning of eyaaka. Only You, Allah, do we worship, and none other than You,” explained Baqai.

An additional exciting feature of the dinner was the surprise all-expenses-paid umrah raffle. Imam Safi Khan drew a paper out of a box full of attendee names, and Br. Haroon Baqai announced the winner–a Dar-us-Salaam staff member. Additionally, there is usually a financial update by Br. Sayeed Jaweed, Finance Secretary of Al-Huda School, but this year there was a twist; it was presented via video by a young student.

Afterwards, Al-Huda middle and high-schoolers performed the play, also titled “Only You.” It followed the story of a young boy struggling to make friends at school, and how his father helped him through these hardships by advising him to turn to Allah.

Sr. Walida Mukhtar, LMSW, delivered the next portion of the program, “Only Together.” She introduced herself as the counselor of Al-Huda School and explained the importance of the bonds between Muslim youth and their families. This year, the administration set aside a space for her counseling office.

In between the final acts of the play, another one of the special moments of the night was the “25th Anniversary Gift,” presented as a red gift box on each table in the banquet hall. The boxes were filled with chocolates and, more importantly, index cards that the attendees filled out with their feedback to the Dar-us-Salaam administration. “These feedback boxes were actually gifts to us at Dar-us-Salaam because the best gift, aside from dua’a and financial support, is sincere advice from the community about what our priorities should be for the next twenty-five years,” said Br. Minhaj Hasan from Dar-us-Salaam’s Donor Care Office.

A part of the program was titled “Eyaaka Na’budu,” where Imam Safi Khan elaborated on the meaning of the phrase from Surat-Al-Fatiha and how we can apply it to our daily lives by turning all our focus to Allah. This was followed by “Eyaaka Nasta’een,” the fundraising portion of the program, presented by Dr. Altaf Husain.

After reviewing attendee feedback from previous years, organizers put extra effort to ensure the program ran in a timely manner; attendees ate dinner earlier and the program concluded an hour earlier this year. There was also an innovation to the dessert; Sweet Tooth Cakes & Pastries prepared a customized assortment of pastries for the occasion.

When it comes down to the well-being of the school, the community bands together for emotional, spiritual, and financial help. These annual fundraisers strengthen the support system, which is critical to the foundation of Al-Huda School.

“The way that all the fundraising presentations tied back to the theme ‘Only You’ and the ayah from Surat Al-Fatiha was a very nice touch. It made the whole program united like a big story. It was such a great opportunity for the community to come together in support of the school,” said Zahra Javaid, an Al-Huda School alumna from the class of 2018.