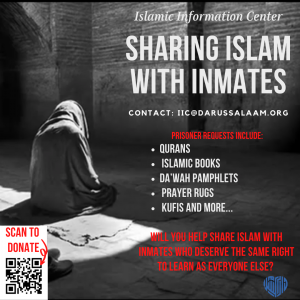 When Islam first came to Makkah, it cleaned up the corruption of the time where many women and orphans were oppressed, baby girls were buried alive, and shirk was taking place in front of the ka’bah. Those who had been previously involved in these rituals were not only able to transform their lives but also be a voice of change for others, too. It is well understood today, the Qur’an, teaching materials, and Islam in general, have the power to purify even the most troubled hearts. Help the da’wah department of Dar-us-Salaam, the Islamic Information Center, give to anyone and everyone who is requesting information about Islam! Some of the requests received include Qurans, Islamic Books, pamphlets, prayer rugs and kufis etc, from new Muslims, non-Muslim (who have heard about the ambitions of the Dar-us-Salaam community in College Park, Md or have heard specifically about the IIC) as well as letters from inmates in prisons around the United States (and sometimes around the world) on a daily basis. Here are some of their voices:

“……I’m currently in prison. Since I proclaimed my Shahadah, my family has left me. But it’s ok. I’m still striving in the cause of Allah. The prison here only provides Christian material and Pagan. I’m from Romania, I ended up in an orphanage, got adopted at the age of 2. I’m 24 years old. I’m in search of the truth & Knowledge so I’m asking will you send me information about Islam ….and a prayer rug.”

The IIC of Dar-us-Salaam receives many letters for requests on Islamic materials. Will you help share Islam with inmates who deserve the same right to learn about it as everyone else?

“…….I’m 27 years old, and I have been a Muslim nearly 2 years now. Unfortunately I am incarcerated…..serving a 6-12 year sentence. But this is not a complete misfortune, as it is here in prison that I was led to the light of Islam by the Mercy of Allah. I was informed that you may be able to provide me with a few materials….I have no family or friends who will send me Islamic material. As Christians, they don’t support me as a Muslim.

Many inmates find religion in prison. As these inmates are accepting Islam, they are actively inviting other inmates to Islam as well. According to Wikipedia, “It is the fastest growing religion in U.S. prisons, where the population is 18 percent Muslim (compared to 1 percent of the general population); 80 percent of religious conversion are to Islam.”

In order to fulfill their quest for Islamic knowledge and da’wah, the Islamic Information Center ships the requests free of charge. On average, about thirty requests come in per month and the average cost to fulfill each request is about $100. Dar-us-Salaam’s Islamic Information Center has volunteers but is lacking funds. Your du’aa and support are needed to raise $36,000 to secure funds for the year. So instead of focusing on fundraising the IIC can focus on providing much needed material in a timely fashion.

Have a share in the reward of the work of the IIC. It is also not limited to inmates, however, as mention previously, many requests come from new Muslim converts, those interested in learning as well as Muslims who can’t afford Islamic books and chaplains who want to build an Islamic library in their prisons.

Let there arise among you a group inviting to all that is good, enjoining righteousness and forbidding evil. Those are the successful ones. (Surah 3:104)

In a Hadith, reported by Sahl ibn Sa’d: The Prophet Mohammad, peace and blessings be upon him, said, “By Allah, that Allah guides a man through you is better for you than a herd of expensive red camels.” (Sahih al-Bukhari 2847, Sahih Muslim 2406) 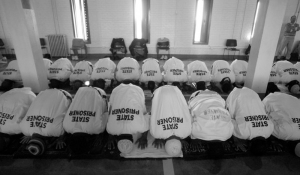 Here is an opportunity from Allah to answer His Call and Insha’Allah be among the successful ones. Let’s take advantage of this opportunity and do our part by supporting Da’wah efforts at Islamic Information Center of Dar-us-Salaam.

How to donate for Da’wah Fund: Please click here.

By supporting our major building projects this Thul-Hijjah, you are supporting every amazing education, social service,...