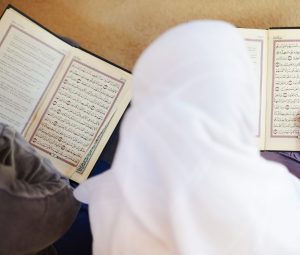 The view from the Zoom screen was mostly plain. A black box, some initials in other little black boxes. As the ceremony started with an introduction, one little face in particular lit up the screen. Asiyah smiled as she recited her last few ayat, occasionally peeking at the screen to see who was watching. It was exciting and beautiful. There was a contagiousness in her smile, and in her excitement almost making it impossible to focus on her recitation.

As she finished, the initial boxes continued to flash and shift across the top of the screen, before Br. Haroon Baqai, Al Huda School principal, appeared in the center to give the closing remarks. Finally, as the Zoom call came to an end, the audio input was crowded with the socially distanced well wishes of Asiyah’s family and friends.

Asiya came under Sr. Fatime three years ago. While she had already memorized quite a bit on her own, she had to restart from the beginning. Immediately, Sr. Fatime took notice of her amazing memorization and retention skills. While other students struggled to retain one page a day, Asiyah’s devotion spoke for itself. However, it did not come without challenges. While speaking to Sr. Fatime, she mentioned Asiyah’s allergies. Her allergies were so severe at times that she would have to miss classes. Despite her struggles with attendance, Asiyah continued to press forward and stood out among her peers.

When asked, Sr. Fatime had high hopes for Asiyah. “My advice to Asiyah is to review the Quran, keep it strong as she graduates, and go forward to do an Ijaza, to be proficient at the Quran In sha’Allah. She should teach others. ”

When asked how it felt to be a teacher to students that go on to become Hufadh, you could hear her smile in her voice, and she simply responded, “Jazakillah Khair.”

For Sr. Fatime, her job is done. However, for Sr. Asma, Asiyah’s mother, she asserts that she and Asiyah are still pressing on. Sr. Asma was asked whether Asiyah was enjoying a break after her graduation, and she eagerly replied, “Not at all!” Asiyah has already begun her Ijaza on top of preparing to move onto her high school career. As Sr. Asma was asked questions about how Asiyah got to where she got, what stood out about her, what made this journey easy on her; Sr. Asma was quick to give me a great lesson for all:

It’s not about the child. Allah subhaanahu wa ta’aala gave every child full potential; so just be able to provide that environment for them, and In shaa’Allah, they can succeed.

“See – every child has potential, and every child just needs a platform to work. It’s not about the child. Allah subhaanahu wa ta’aala gave every child full potential; so just be able to provide that environment for them, and In shaa’Allah, they can succeed. I don’t want to say much, but I have this view that it’s not about the child, it’s how parents make an effort to give them the right environment from the beginning. Just make sure that parents practice fully, your Islam; learn it, practice it, and do the same thing with your child.”

Dar-us-Salaam and the Hifzh school is humbled to be able to have such an amazing community member among us, and we hope to see her flourish and grow into her beautiful character and dedication to her education and her deen. May Asiyah, and the other hufadh graduates of Al Huda School, remain of those who will guard the Quran, and hold it in their heart.

May Allah make it easy on them, and give them the best in this life and in the hereafter.