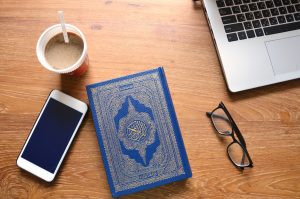 The Holy Qur’an, a book of guidance from Allah, is filled with stories and examples of inspiring, high moral standards according to our Creator. As we deepen our understanding and implement this extraordinary book, the first stepping stones are reading and memorizing. Consequently, the first official project of Dar-us-Salaam that began 21 years ago was the Qur’an Institute!

Founded in 2000 and currently directed by Sr. Rana Khan, the Qur’an Institute revolved around the Qur’an literacy mission, which continues to be the driving force of the project today: that every single Muslim becomes literate in the Qur’an. They should be able to, at minimum, read and understand the words of Allah.

AL-HUDA HIFZ SCHOOL: HOW DID IT BEGIN? 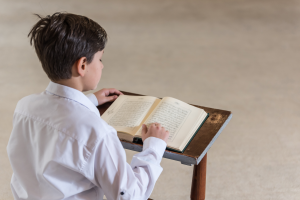 Children as young as 8 years old can memorize the entire Qur’an by age 11 through the Hifzh School.

Beginning the Qur’an Institute at Dar-us-Salaam launched the tahfeedh (memorization) program or regularly scheduled part-time Hifz School. Some of these early students displayed strong potential. As a result, Br. Haroon, long before he was Al-Huda School’s beloved principal, decided to reach out to their parents for an idea that was a bit unorthodox at that time.

“These students could do so much more than part-time hifz,” Br. Haroon said. “As I pitched the idea for full-time Hifz, eight brave families agreed to move forward with it.”

“We can see how Allah blessed their efforts, as these brothers now have successful careers in law, medicine, and engineering.” Br. Haroon reflected. “I call them the cream of the crop, ma shaa Allah.”

“We can see how Allah blessed their efforts, as these brothers now have successful careers in law, medicine, and engineering.” Br. Haroon reflected. “I call them the cream of the crop, ma shaa Allah.”

A few years after the first Hifz School class began, a second class was added for sisters who wanted to join the Hifz School full-time. The specific methodology includes learning and reviewing a new portion of the Qur’an for ten days to transfer from short-term memory to long-term memory as part of the daily structure. Along with learning a new portion, the students also review the previous sections as well. This same system that was established in 2002 still exists in Al-Huda Hifz School today. It is given at the Hifz School orientation and has proven successful with over 116 graduates to date, alhamdulillah. 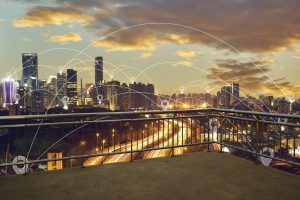 The Dar-us-Salaam huffadh are asked to travel near and far to other cities to lead Taraweeh.

The efforts of both the Qur’an Institute and Hifz School come full-circle when Al-Huda Hifz School graduates are intentionally invited back to become teachers. Some of them, including a handful of the first few graduates, now have children either in Al-Huda School or the full-time Hifz School.

Before beginning Qur’an Institute, Br. Haroon first visited Dar-us-Salaam in 1997. He traveled from Saudi Arabia (where he was residing) to lead Taraweeh at Dar-us-Salaam and the ADAMS (All Dulles Area Muslim Society) Center. In the late 90s, there weren’t many huffadh readily available to recite the Qur’an by memory for the nightly prayers.

Today, from the blessings of Allah, Dar-us-Salaam is often considered the “home of the huffadh.” About three to four months before Ramadan, the Dar-us-Salaam community receives messages from dozens of different masajid requesting an imam to lead Taraweeh for the month of Ramadan.

“It becomes a big puzzle to figure out who to send where,” Br. Haroon said.

Some requests come from Muslim communities in different states, including Pennsylvania, Oklahoma, Ohio, and Colorado. However, requests from other countries like the Bahamas, Bermuda, Brazil, .etc, are not always easy to fulfill.

FULL-TIME HIFZ: HOW LONG DOES IT TAKE? 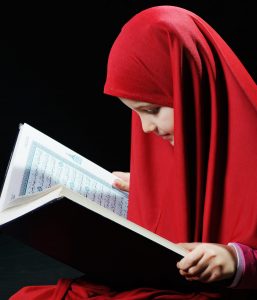 Many parents want to know how quickly their young student can become a hafidh; however, there are several factors to consider. How motivated are they?  How well can they read from the Qur’an?  How much do they know before beginning at the Hifz School?

On average, it usually takes between two to three years to complete the memorization of all 30 azjaa (parts) if a student begins with less than one juz when starting at Al-Huda Hifz School. Students that have at least five azjaa memorized can complete the Qur’an about 40% faster than a student with less than two azjaa.

Br. Haroon has personally attended at least 100 Qur’an graduation ceremonies and explained that it feels like the first time every time.

“It’s priceless to see those students finish the Qur’an. The impact that it has on the children and the community is hard to explain,” Br. Haroon said about witnessing the students’ success as they recited their last ayat during their Hifz graduations.

“It’s awesome to witness one way that Allah subhaanahu wa ta’aala is fulfilling His promise of preserving the Qur’an through these children’s hearts.” Br. Haroon added.

“It’s awesome to witness one way that Allah subhaanahu wa ta’aala is fulfilling His promise of preserving the Qur’an through these children’s hearts.” Br. Haroon added.

Sr. Rana Khan, the director of the Qur’an Institute, explains the flexibility of the various classes that work well for a broader range of Qur’an students.

“It’s a great alternative either for students who can’t commit to memorizing full-time or for parents who don’t prefer the Hifz School route because of the requirement to homeschool other subjects.” Sr. Rana explained.

Students can still complete their Qur’an memorization through the Qur’an Institute, but at a slower pace than the full-time Hifz School. Qur’an Institute students in the part-time hifz class can study after school hours or on weekends, and they also include courses that teach basic tafseer.

“It works well for students on the waiting list for the full-time Hifz School.” Sr. Rana said. The Qur’an Institute implements similar standards and methodology as the Al-Huda Hifz School for the part-time hifz. Br. ​​Zahid Adetoro trains the teachers at the beginning of the year, and he oversees the hifz aspect.

The Qur’an Institute also offers several other classes, including Hifz Club with crafts and stories for kids, Bridge-to-Reading to encourage independent reading, hufadh review classes to allow the students to retain their memorization, ijazah preparation classes for those who plan to teach, Arabic classes, and many more. Qur’an Institute also hosts Khairukum, the free summer reading circles organized during Ramadan.

Qur’an literacy is the goal because reading and memorization go hand-in-hand with learning and understanding.

“Even basic Tafseer while memorizing is very eye-opening,” Sr. Rana explained her journey as a student of the Qur’an with her daughter. “It’s essential to learn it. Even some ayat, which seem clear and straightforward, are so much deeper than what you’d think. It brings the entire Qur’an to life when you understand the meaning and background. After learning the tafseer, it’s so sad to realize how often we used to read the Qur’an without really understanding the deeper meaning and enjoying the experience.”

QUR’AN UNIFIES US AS MUSLIMS 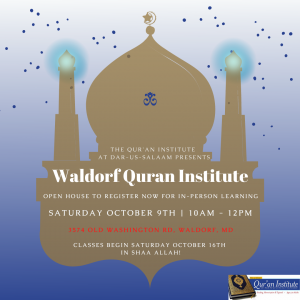 Dar-us-Salaam has explored and opened several branches of the Qur’an Institute pre-pandemic in Rockville, Mclean, Burnsville, Centerville, Baltimore, Columbia, and Waldorf. In April 2020, the Qur’an Institute courses shifted to online classes via Zoom, allowing students around the world to join. The Waldorf location is now open for in-person Qur’an classes.

“We would love to have a Qur’an Institute in every neighborhood where Muslims can get together and learn the Qur’an.” Br. Haroon said, explaining that the one thing no Muslim disagrees about is the Qur’an. “People may disagree on the fiqh, prayer, celebrations and many other things. But not the Qur’an. It’s a big effort to unite people.” He added.

People may disagree on the fiqh, prayer, celebrations and many other things. But not the Qur’an. It’s a big effort to unite people.” He added.

To learn about the different Qur’an Institute classes, visit https://darussalaam.org/news/quraninstituteclasses

To enroll in the Qur’an Institute ONLINE, visit: www.darussalaam.org/quran

Below are some related videos from Hifz Graduations, our Hifz School graduates leading prayers throughout the region and much more. Subscribe and explore our YouTube channel : https://www.youtube.com/c/DarusSalaam to learn more about our community.