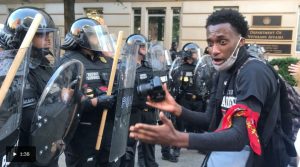 As protests overtook streets and highways across the nation this summer, Dar-us-Salaam held meetings with the major segments of the community to listen and learn how best to address racism and implicit bias existing within the Muslim community.

A private meeting over Zoom included the shura, several Black community members, and also Black staff members of Dar-us-Salaam and Al-Huda School. Everyone agreed that more training on implicit bias can help identify racism, and educating staff, students, and the general community on Black History can — over time — help change the mentality of some Muslims who have accepted a false narrative of the Black American reality.

The shura met with the Dar-us-Salaam Youth group as well, and Brother Safi advised the youth to channel most of their energies into developing educational tools and resources. While protests have their time and place, Br Safi said changing the understanding of people was the first step.

Al-Huda Alum Brother Adam Lensa (pictured above from the Washington Post) channeled the emotions of many young people as he challenged police at a protest in Washington DC to show solidarity with the protestors.

Br Safi also had special sessions with Al-Huda High School students — over Zoom due to the pandemic — and asked them to share their thoughts and feelings about racism and fairness in the Muslim community and in Al-Huda School.
As a first step to educating the community about Black History, Al-Huda School teacher Zaynab Abdullah was asked to prepare a presentation on the history of slavery and the Black civil rights movement.

Sister Zaynab was involved in the civil rights struggle of the 1960s and 1970s, and she comes from an activist family. Her presentation at the iMuslimah Sister’s Halaqa this past July moved many sisters to tears. “Because she lived this struggle, she was able to make it very real for us .. I’ve lived [in America] most of my life, but I’ve never heard or seen the images and stories she presented … I’m just starting to see how much I don’t understand about the experience of my Black sisters and brothers,” said one attendee whose parents are immigrants from Pakistan. Sister Zaynab gave the same presentation to Al-Huda School staff as part of the staff orientation, and it was also well received.

A video of Sister Zaynab’s powerpoint presentation along with her narration is available on Dar-us-Salaam’s Youtube channel. Dar-us-Salaam is planning for more training and community education on racism and injustice, in shaa Allah.